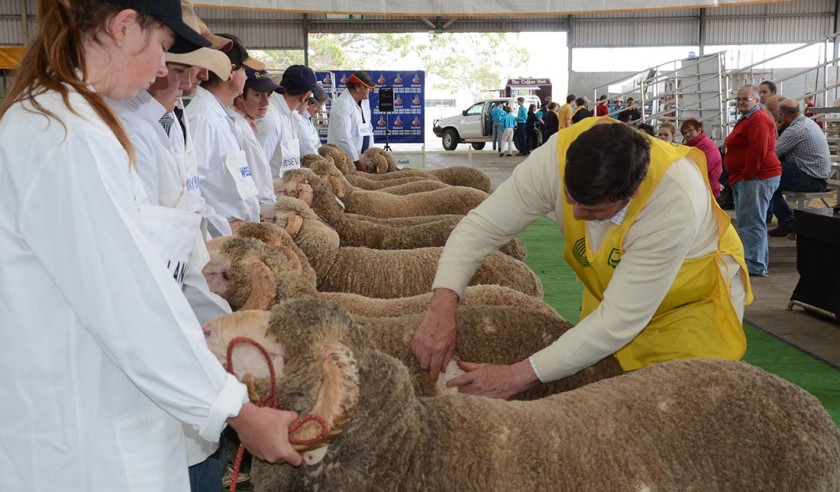 “2014 Hogget Competition” by The Land newspaper

“2014 Hogget Competition” by The Land newspaper

Sired by the 2009 Dubbo strong wool and reserve grand champion ram Towalba7.23, the hogget champion had stood up against 11 entries in the Dubbo competition.

This ram was champion strong wool and champion March shorn ram of the Hay fixture.

“He has a big broad back and is growing long staple soft strong wool,” Mr Merriman said.

Warick Kopp, who held the ram at judging, said the dam was a special stud ewe from a cross of Oakbank and Towalba bloodlines.

Its wool measured 3.4 micron standard deviation (SD) with a co-efficient of variation (CV) at 15.2 per cent with a comfort factor measurement of 99.4pc.

Trundle based Darriwell stud of Russell Jones and family, exhibited second placegetter with an 18.2 micron strong wool ram, a son of Darriwell 9.1, the Sydney and Dubbo strong wool champion at 18.7 micron.

In its third showing the ram had won the hogget championship at both Trundle and Condobolin shows, with Mr Merriman saying it had thickness and extra wool cut.

“This heavy cutting fleece is of rich strong wool,” he said.

Third placegetter from the Cox family’s Langdene stud, Dunedoo, was described by the judge as a correct rich wool fine/medium ram growing wool of 18.9 micron.

Studmaster, Garry Cox said this ram was very valuable to the stud and would be kept as a Langdene stud sire.

The competition is open to members of the Midstate Merino Group and attracted rams from 10 members.

FOURTEEN Merino stud members of the Midstate Merino group will offer more than 1400 Merino and Poll...